Although eating healthy food and watching your calorie intake usually leads to a better life, having some dessert from time to time can certainly do wonders for your mood. The residents of Hawaii certainly think so and malasadas are huge local favorites. 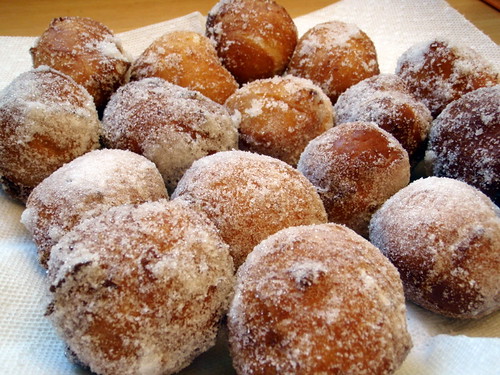 Malasadas are a type of fried doughnut made of small balls of yeast dough and coated with sugar. The main difference between them and other types of doughnuts is the presence of eggs in the dough. They originated in Portugal, but they are also hugely on the other side of the Earth, in Hawaii. They were first introduced to the islands in the 19th century when many Portuguese immigrants moved there to grow sugar cane and brought the traditional malasada recipe with them. Although the original ones had no hole in the middle, the Hawaiian versions sometimes do.

Among the many Portuguese natives who relocated to the Hawaiian Islands in the 19th century were couple Amelia and Arsenio DoRego. Having worked in the sugar cane fields, they were some of the pioneers of Hawaiian malasadas. Years later, in 1952, their grandson Leonard and his wife Margaret decided to pay homage to their Portuguese roots by founding Leonard’s Bakery and making malasadas for the locals. Despite initial doubts, they became instantly popular with the locals and Hawaii’s malasada-making tradition was born.

To this day, Leonard’s Bakery is hugely popular with locals and tourists who want a taste of their legendary malasadas. Although this means you may have to wait in line for a little while before getting your hands on one, it also means that you are guaranteed a fresh malasada every time. You can either get the original malasadas with plain sugar or coat them with li-hing or cinnamon. There are also multiple fillings to choose from, such as chocolate, coconut, custard, guava, macadamia nuts, or the ever-changing flavor of the month.

Leonard’s bakery is located on Honolulu’s Kapahulu Ave., but there are several Malasada mobiles in the area, so you can get a fresh and delicious malasada from somewhere close to your home or office.

This elegant café was first opened in 2016 by a native Hawaiian named Gayla Young, with the clear goal of creating a place where local communities and visitors can enjoy an authentic Hawaiian atmosphere and local cuisine. Malasadas were on the menu from the very beginning, along with other desserts like homemade ice cream, banana bread, and cookies. It took them over 100 batches to perfect their recipe, but the result is nothing short of spectacular and manages to perfectly blend tradition and innovation.

Although they are true to the original recipe guidelines, their malasadas are fluffier on the inside and crispier on the outside than regular ones. Although they do not have the option of filling your malasadas with various flavors, they still coat them in white, cocoa, coffee, or li hing sugar. Malasada lovers who would like to try out new versions of their favorite dessert can also go for the Malamode, which is a malasada filled with homemade ice cream, or the malasada bread pudding.

This bakery and diner has been serving Hawaiians since 1950, with their popularity and reputation steadily growing ever since. They have always made a point about using as many local ingredients as possible and their seasoned bakers make every baked good from scratch, giving their products the unique taste and flavor that makes people return again and again. Their original location is on Honolulu’s N. Kuakini St., but due to their popularity they opened two new locations throughout the past decade: on the Nimitz highway and inside the Ala Moana Center shopping mall.

Although the most famous dish on their menu is their coco puffs, their malasadas are just as delicious. They are much larger than the ones served in other places and they come with different fillings, such as apple, azuki beans, haupia, local coconut milk-based dessert, and passion fruit.

If you’re looking for a special malasada, this may be the place for you. Piggy Smalls is located on Honolulu’s Ala Moana Blvd. and has a rich menu consisting of soups, dinner and brunch items, various sweets, and a drink selection. After opening and running the highly successful restaurant The Pig & The Lady, award-winning chef Andrew Le and his team decided to open this special second restaurant, giving it an urban design and feel. Visitors can either have a meal or dessert inside or enjoy the pet-friendly outdoor seating area.

Piggy Smalls’ malasadas were created by their pastry sous chef, Kelsey Takara, with their peppermint chocolate flavor making them unique. They also have seasonal malasadas for different occasions, such as an orange creamsicle with candied orange peel for January and one filled with white chocolate raspberry cremeux for Valentine’s Day.

This local eatery is located on Auahi St. in Honolulu and has some of the most esthetically pleasing dishes around, making it a great place to show off your meals on social media. Most of them were created by their head chef, Reid Matsumura, who is an Oahu local, and chief food officer Keoni Chang. They are mostly famous for their poke bowls, which are meals that consist of a rice base, a poke that’s either Hawaiian ahi, Hamachi, salmon, or “land food”, plus sides and toppings of your choosing.

Their malasadas are special, in the sense that they are much smaller than regular ones. They are usually served with a topping of horchata ice cream, as well as a special ramen-and-almond topping that gives it a sweet and salty taste.

So there it is, 3D Partners Wealth Advisors presented five of the best places in Hawaii to eat malasadas. If you want to experience the original recipes just as they were in the 19th century or if you want to experiment with different flavors and toppings, make sure you visit one or more places on this list, as they’re sure to make your malasada-eating experience a memorable one.